VIDEO 6:  This Details The Defensive Strategy Screen In The Play Ball Lineup App.

VIDEO 4:  This Details The Local Rules Screen In The Play Ball Lineup App.

VIDEO 5a:  Part 1.  This Details How To Use The Position Preferences Screen Within The Play Ball Positions App.

VIDEO 1:  This Details How To Use The Create Lineup Screen Within The Play Ball Lineup App.

VIDEO 7:  This Details The View Lineup Screen In The Play Ball Lineup App.

VIDEO 2:  This Details How To Complete The Game Information Screen In The Play Ball Lineup App.

VIDEO 9:  This Details How To Export Your Lineup From The Play Ball Lineup App.

VIDEO 10:  This Reviews The Actual Lineup Document That Is Exported By The Play Ball Lineup App.

VIDEO 3:  This Details How To Complete The Team Information Screen In The Play Ball Lineup.

VIDEO 5b:  Part 2.  Continuation On How To Use The Position Preferences Screen Within The Play Ball Positions App.

VIDEO 8:  This Details How To Set Your Batting Order Inside The Play Ball Lineup App. 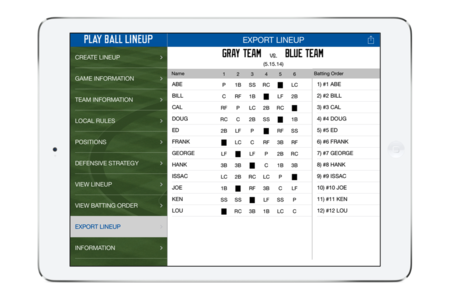 Step 9:  To email the lineups, tap on the Export Lineup button and then tap on the "Export" icon in the upper right hand corner.  An email will appear with the lineup attached.  just address the email and send.  Once the email is received, you can print the lineup in order to bring to the game. 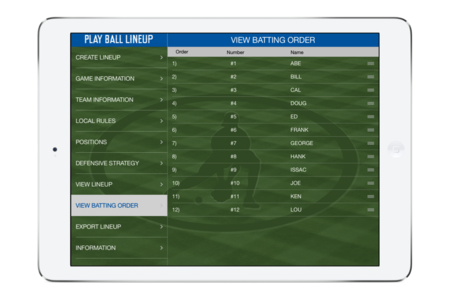 Step 8:  Players are initially listed in alphabetical order on the Batting Order screen.  Only the players identified on the Team Information page as "YES" to the "Playing?" question in the game will be listed.  To set your batting order, simply TAP on the three lines to the right of a player's name and hold.  Then move the players to set your order.

If the "Continuous Batting Order" setting is not chosen, all players will still be listed but the order will only have nine spots.  Only the starting players from the first inning will be listed in the batting order.

Step 7:  The View Lineup is designed to let you view your lineup by player by inning by position.  Players will automatically be listed in alphabetical order.  To tweak the lineup, simply TAP on the player's position cell in the inning you want in order to change the position.  If you don't like the lineup the app made, hit the "Shuffle" button to have the app make an entirely new lineup.  There is also an undo which will let you undo your last action only.  You can also refer to the Lineup Issues box to view any issues your tweaks may have created.  NOTE:  When changing a player's position, if another player had that position prior, that player will automatically go to the bench to be re-assigned. 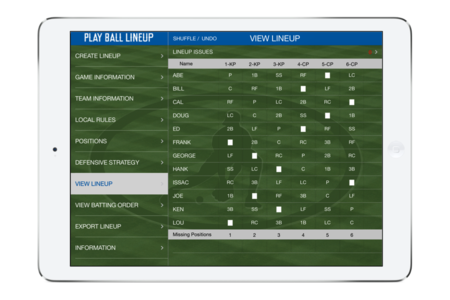 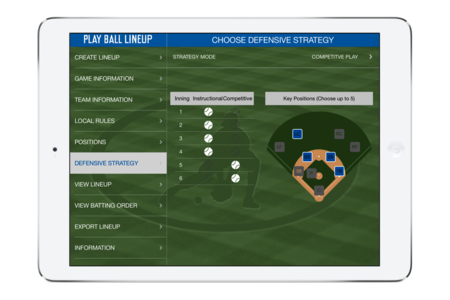 Step 6:  From the Defensive Strategy screen, choose between Instructional Play and Competitive Play to customize your strength of defense by inning.

By selecting Competitive Play, you are choosing to have your better fielders in key positions in the innings you feel you need to play your best defense. You may select up to 5 Key Positions that you deem critical to playing strong defense in the game.  (NOTE: Key Positions chosen are apply to all Competitive Play innings).

By selecting Instructional Play, the app will not create a lineup around the basis of playing better fielders at key positions in certain innings of the game.  Instead, it will set the lineup based on using the other inputs and settings in the app.  (NOTE: Key Positions are not applicable to Instructional Play innings).

​Step 5:  From the Positions screen, choose the Competitive Play strategy mode to customize the positions you want each player to play in game.  Or, choose Instructional Play and all players will be able to play "ANY" position.  (NOTE: Players names will appear exactly as entered on Team Information screen.  "OF" means any eligible outfield position and "ANY" means any eligible position as selected on the Game Information screen.)

Choose to specify Pitchers and Catchers by inning.

Enter the number of innings you want each player to play. 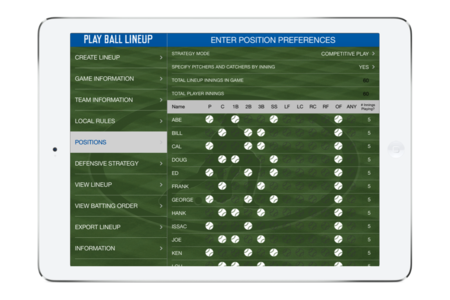 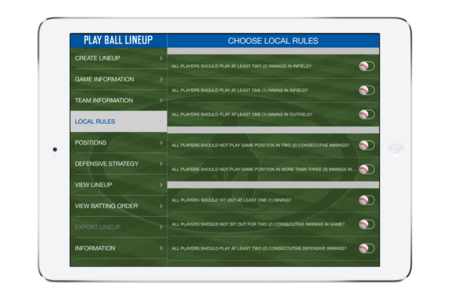 Step 4:  From the Local Rules screen, choose any/all Local Rules that apply to the lineup you are creating.  (NOTE:  Some Local Rules may become "grayed out" if they are not possible based on the strategy or if they conflict with another rule.)

Step 3:  From the Team Information screen, TAP on 'Team Name" at top of screen to choose the team you will create the lineup for.  (NOTE: Only the 2 teams chosen on the Game Information will appear in the menu.)

ENTER Player Names, Uniform number, if available. (NOTE: This is a one-time exercise.)

Choose the Competitive Play strategy mode to provide a customized Fielder Skill Level rating for each player on a 5-point scale (e.g. Rookie, Emerging, Proficient).  Or, choose Instructional Play and all players will have an "Emerging" skill level.

Provide each player's "Playing?" status for the game. 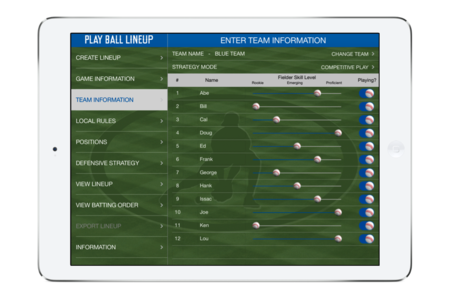 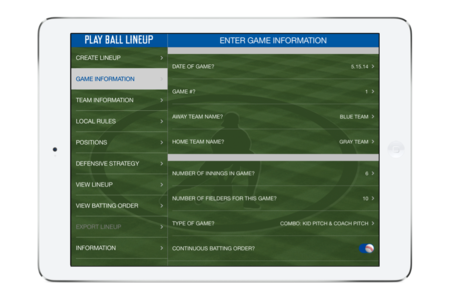 Step 2:  From the Game Information screen, provide inputs to all game related questions and settings.

Create lineups with up to 12 fielding positions. 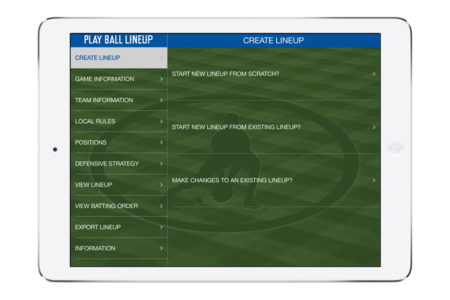 From the Create Lineup screen, choose how you want to create your new lineup.  (NOTE: If it is your first lineup, you must tap on "Start New Lineup From Scratch".)

how TO USE play ball lineup